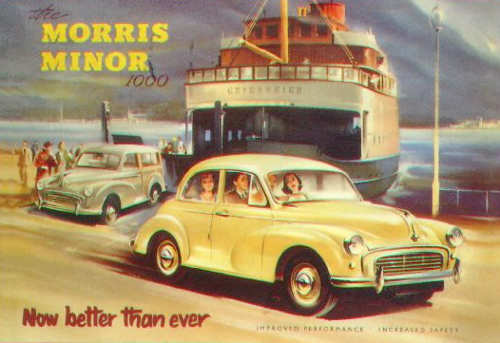 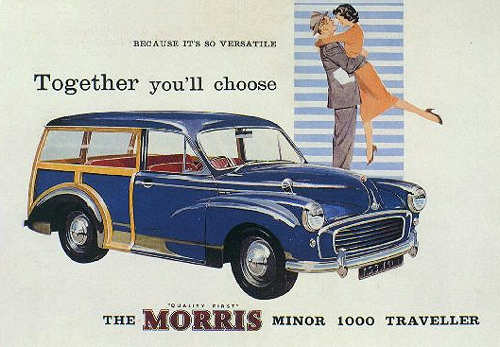 The A-Series Engine
When one considers the history of this engine, it is hard to believe that after 50 plus years it is still being produced. Amazingly, the -engine originated back in the late 1930's for powering Austin trucks. Austin had decided that they should attack the truck market with more vigour, but found themselves without a suitable engine. To avoid the lengthy and expensive process of developing a new engine, Austin blatantly copied the GM/Bedford 'Stove Bolt' overhead valve truck engine and somehow avoided the legal entanglements that could have resulted from such an exercise. The Austin engineers modified the GM engine by shifting the camshaft from the left hand to the right hand side of the engine, and designing the plugs and distributor to be on the opposite side to the manifolds. This necessitated the location of the pushrods, inlet and exhaust ports and some of the head studs on one side of the head. Room was made by siamesing some of the ports. During the war the truck engine was cut down to four cylinders from the original six and used in the Austin 16, the Hampshire / Hereford and Austin Healy. It was scaled down to 1200cc for use in the A40 and still further to 803cc for the A-series engine. The A-series engine wa first released as the AS3 engine and was used to power the Austin A30. It was originally planned to produce an ultra-lightweight aluminium engine but underwen many changes before the final production engine was produced. The first prototype engine was completed in March 1950 but underwent a number modification before reaching the final production form. The cylinder head was designed by Harry Weslake, an independent consultant who had long worked for Austin an whose design was instrumental in making the engine combustion chambers so efficient. Early testing of the prototype showed design weaknesses in the crankshaft and bearings and it was subsequently decided to increase the size of the main bearings and the big end bearings. At the same time a new and stiffer crankshaft was fitted to the engine. Further testing of the prototype engine again showed weaknesses and the main bearings were again increased in size and the gudgeon pins were also increased in diameter. 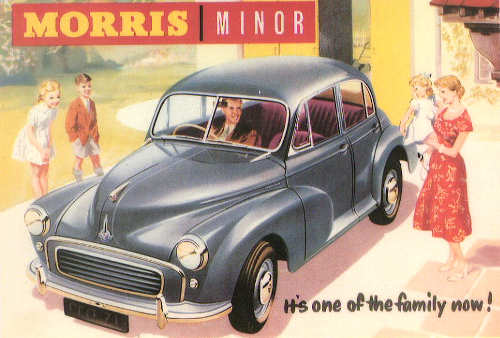 The new engine was first shown at the Earl Court Motor Show in October 1951 with the new car it was to power, the Austin A30. Not long after the Motor Show the Austin and Nuffield companies merged. At the time of the merger, Nuffield was working on a new overhead valve engine to replace the old 'lump', the Morris eight engine. The Morris eight, copied from the ancient Ford 8 engine, was too old fashioned and under-powered to continue to be used in the Morris Minor. So one of the earliest results of the merger was the adoption of the A series engine for the Morris Minor. The new engine only marginally increased the power and torque compared with the old side valve engine (see table below). It can be argued that the Series II Minor fitted with the A-series engine still lacked power, particularly for the export markets, and was fitted with a gear box with poor ratios between the gears and of dubious quality. The engine and gearbox was found to be quite acceptable in England, but on the high speed autobahns and freeways found in Europe and America was found to be underpowered and unreliable. The Series II was not a significant improvement compared with the side-valve MM. Finally in 1956, the Minor was marketed with a larger and stronger A-series engine with an improved gearbox to match. Fortunately, it was decided to improve and strengthen the engine generally. The block was a new casting with bores 1 - 2 and 3 - 4 siamesed in pairs (there was no longer a water jacket between th pairs of bores). The crankshaft was redesigned with larger stiffer conrods, and harder wearing lead-indium bearings were substituted for the 803cc's white metal. Oil circulation and filtration was changed to a full flow system to prevent particles of the harder lead-indium bearing material damaging bearing surfaces. Valve size was increased, the combustion chamber was increased and the SU carburettor was increased from one and an eighth to one an a quarter inch. An improved gearbox was fitted with ratios to match the increased power and better synchromesh and a remote gear change giving a sensibly short and positive gearstick in place of the long pudding stirrer previously used. 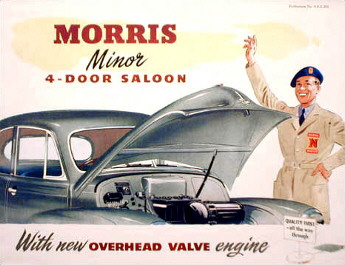 The design of Morry engines has always puzzled me. For example, take the MM side valve engine which I consider to be the last 'true' Morris engine to be fitted to the Morris Minor. It has a capacity of 918cc, a tiny bore of 57mm and a very long stroke of 90mm resulting in a bore/stroke ratio of 1.579:1. Those pistons must really race up and down the cylinders at high speed when the engine is producing it's maximum claimed BHP of 27.5 at 4,400 rpm! And the stresses imposed on the bottom-end compared with a modern big bore and short stroke engine must be considerable. I had thought the bore/stroke ratio was chosen because of the antiquated British registration tax based on the bore size of the engine. However, the A series engine developed by Austin and fitted to the Series 11 Morris Minor, was designed and manufactured after the tax was repealed. This engine also has a long stroke of 76.2mm compared with a small bore of 57.92mm (bore/stroke ratio of 1.316:1). A small bore meant that only small valves could be accommodated in the cylinder head. This, coupled with the 5 port siamese twin design of the head, lead to poor 'breathing' of the engine. Another restriction of the Series 11 engine was the weak design of the crankshaft, which was often described as "a bent piece of wire with some journals ground onto it". As a matter of interest, the Morris Minors main rival launched on the world market at about the same time, the VW Beetle, had a bore and stroke of 75mm and 64mm resulting in a bore/stroke ratio of 0.853:1. It was hardly surprising that the VW could cover considerably more miles without a major engine overhaul! The next engine, the 948cc fitted to the Morris Minor 1000, had the bore size increased to 62.94mm resulting in a bore/stroke ratio of 1.211:1. The increase in the bore size was accompanied by a toughening-up of the bottom end resulting in the first reliable A Series engine.